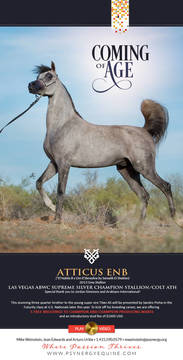 Special thank you to Jordan Simmons and Arabians International!

This stunning three quarter brother to the young super sire Titan AS will be presented by Sandro Pinha in the Futurity class at U.S. Nationals later this year. To kick off his breeding career, we are offering 5 FREE BREEDINGS to Champion and Champion producing mares and an introductory stud fee of $1000 USD.